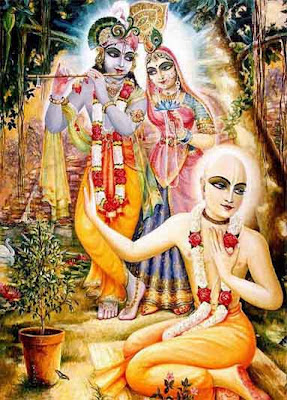 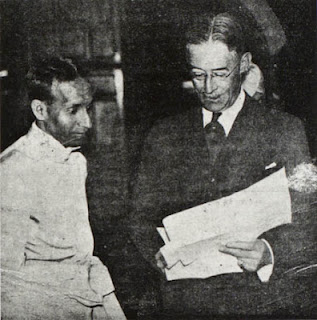 A note for those who are looking for Swami Bon Maharaja's books:

People looking for his books can find them through sites such as Abebooks, Amazon, Eurobuch and similar booksearchengines. Keep in mind that most works are published under the name "Tridandi Swami B.H. Bon". If you happen to be in Vrindaban (India), you can ask the local bookshops there or visit Swami Bon Bhajan Kutir, which you should anyhow :)Bhakti-Rasamrta-Sindhuh, The Search, My Lectures in England and Germany can relatively easy be obtained. Older works such as the "Geeta as a Chaitanyite reads it" have become rare, which is a pity, since it is a very beautiful Bhagavad Gita based on Srila Visvanatha Cakravarti's commentary. If you speak German, you can very easily obtain "Die Antwort der Religionen auf 31 Fragen" by Gerhard Szscesny, which contains interviews with the major religions; Swami Bon representing Hinduism. The same book is available in Dutch as "Religies antwoorden op eenendertig vragen".Last but not least, "On the Way to Vaikuntha" (Baikunther Pathe) has come out recently. You can find information and place orders here: http://waytovaikuntha.weebly.com
Geplaatst door Radha Vallabha

"I make my obeisances with deep and loving devotion for ever and ever to my Gurudev, who is known by the name of Srimad Bhakti Hriday Bon, who being attracted by the lotus-feet of Radha-Madhab is for ever and ever immersed in the perennial stream of supramundane joy emanating therefrom.

I bow down again and again with loving devotion to my Gurudev who is a wandering Tridandi mendicant and erudite Vaishnava (who) is always following in the wake of Sri Rupa; I make my obeisances in all humility, at all times with sincere loving devotion to my Gurudev who resides happily in the Kunja (bower) allotted to him by Shrimati Radhika, the dearest Divine Consort of the Supreme Lord Sri Krishna who is Rasa epitomized, who has taken to the way of Bhakti in consonace with the teachings of Sri Chaitanya - nay, whose whole pattern of life is moulded on the teachings and precepts of Sri Chaitanya." 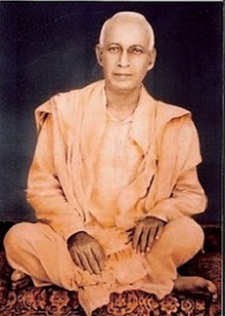 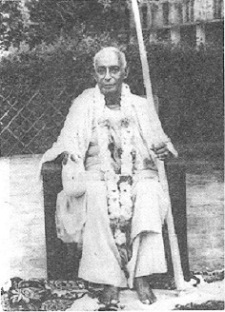 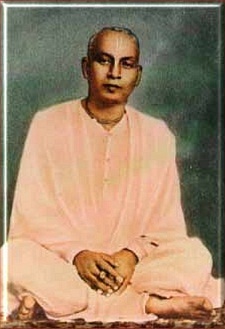 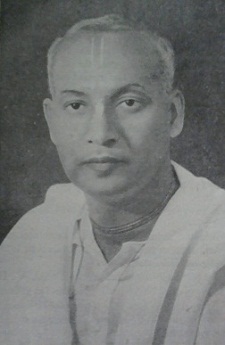 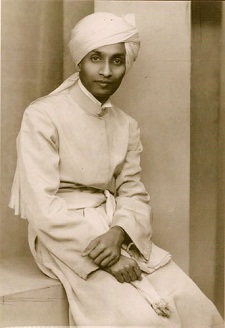 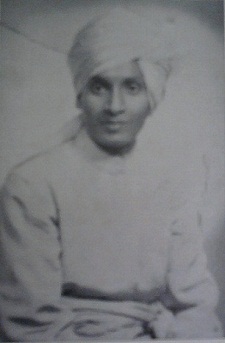 Swami Bhakti Hridaya Bon Maharaj was born on 23rd of March, 1901 of Dakshinakali Devi to Bramharsi Rajanikanta in the village Bahar of Vikrampur Subdivision in Dacca District in undivided Bengal as Narendranath Mukherjee.
In the year 1914, Narendranath left his village-home to be admitted to the English Mission School at Ranchi. This developed in him a balanced power of expression in English, Logical thinking, a natural association with priests, particularly Reverend Canon William Cosgrave and the seed was sown within him for religious mendicancy.

After his graduation from School, he continued his search for the ultimate with aching pain and unflinching resolute.
Shortly thereafter, in 1918, he heard discourses of Bhakti Siddhanta Saraswati Prabhupad and thought at long last he had reached the fountain from which would spring his desired immortality.
In 1923 he took to renunciation, and was named Tridandi Swami Bhakti Hriday Bon - remarkable was the name; disciples of Prabhupad who took renunciation were given names from amongst "Ten names". Bon was not given to any other disciples of Prabhupad.
The selection of the name was the vision of the great man as he knew the place of devotion of this favorite disciple of his would be "Hridi Vrinda Bon".

Between 1924 and 1932, under the guidance of his spiritual master, he preached the message of Lord Sri Caitanya and became famous for his spiritual knowledge and oratory power, amongst the intellectuals, from Kashmir to Kanyakumari and Dibrugar to Dwaraka.
Being impressed by his succes in spreading Lord Caitanya's message within the country, Sri Prabhupada decided to send him to England and Germany as his first emissary and bestowed on him the difficult task to propagate the Lord's message abroad.
In England he was invited to deliver lectures at Oxford and Cambridge University, University of Exeter and various other theosophical and academic institutions.
In July 1933, Swamiji was received in audience by Their Majesties King George V and Queen Mary at Buckingham Palace.
In London, he founded "Caitanya Society" and also a Temple Trust. In Germany he was invited and delivered lectures in Berlin University, University of Munich, Bonn University, Leipzig University and various other religios organisations.

In 1937, Srila Prabhupad passed away, and shortly thereafter Swamiji severed his connection with the Institution founded by Prabhupad as it threw itself into eternal strife and litigation.

In 1939, Swamiji was invited to U.S.A. to deliver lectures at University of Washington, University of Chicago, Colombia University, and various other Organisations, Synagogues etc.

Shortly after his return from U.S.A. Swamiji decided to settle in Vrindaban and started construction of his Bhajan Ashram"Bhajan Kutir". While his Ashram was under construction he underwent a hard penance and started his pilgrimage to Himalayas by foot.
On return from his pilgimageSwamiji entered his new Bhajan Kutir, with his Beloved Deities Sri Sri Radhagovinda and engaged himself completely in his spiritual practices.
He secluded himself totally, observing silence, and having selfcooked single meal a day engaged in spiritual practices continually for four years.

At the conclusion of his selfimposed seclusion, Swamiji felt the need of a Theological Institution to train up scolars who would represent Indian Culture and Spiritual Heritage.
Hence he established the "Institute of Oriental Philosophy" a research center on Vaishnabite Philosophy, the only one of its kind in the entire country.
He also established an Intermediate college at Nandagoan, the abode of Nandalala the foster father of Lord Krsna.

He was elected President of Vaishnaba Sadhus at Kumbha and also elected as prefect of Gaudiya Math during the later part of his life.

He revisited the U.S.A., U.K., Germany, France and other European countries, several times thereafter on invitation to spread the Philosophy Of Lord Caitanya to the western world through a language which can reach the majoruty of mankind.

On 7th of July 1982 he responded to the call of the flute-the confluence-the tributary met- nay, lost herself in the ocean of Devotion. 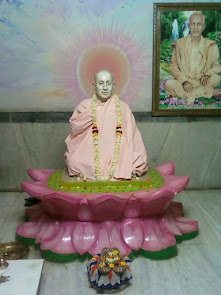 Some Books and Works by Swami Bon 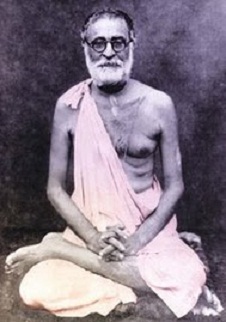